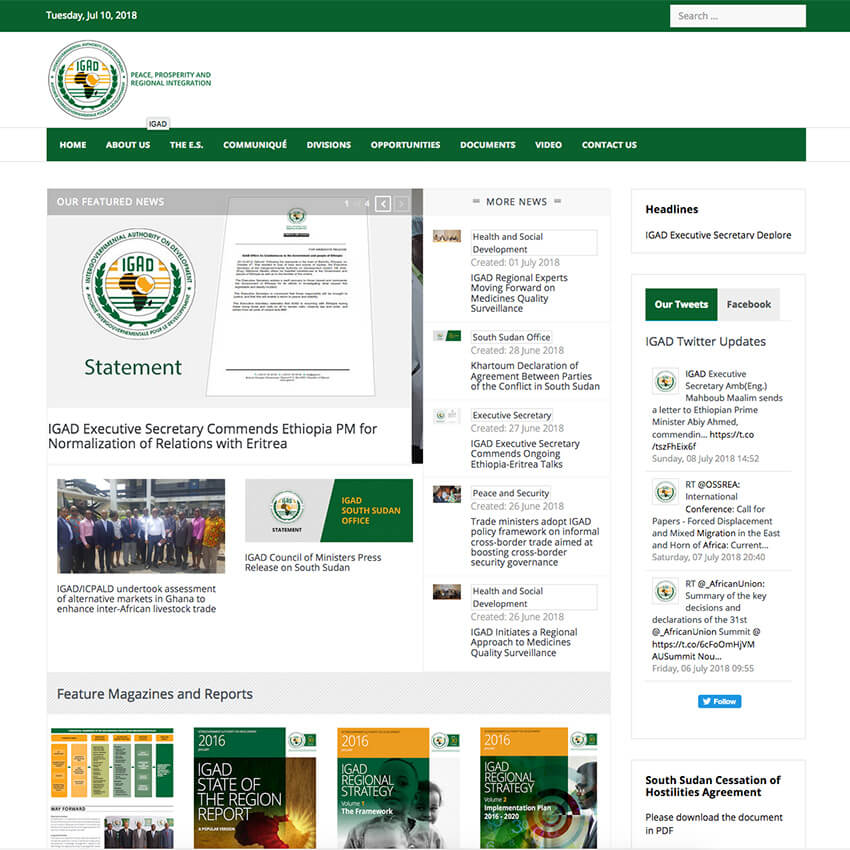 IGAD  was  created  in  1996  to  supersede  the  Intergovernmental  Authority  on  Drought  and Development(IGADD),  which  was  founded  in  1986.  This followed the recurring and severe drought and other natural disasters between 1974 and 1984 that caused widespread famine, ecological degradation and economic hardship in the Eastern Africa region. Although individual countries made substantial efforts to cope with the situation and received  generous  support  from the  international  community,  the  magnitude  and  extent  of  the  problem argued strongly for a regional approach to supplement national efforts.

In 1983 and 1984, six countries in the Horn of Africa (Djibouti, Ethiopia, Kenya, Somalia,Sudan and Uganda) took action through the United Nations to establish an intergovernmental body to collectively combat drought and desertification in the region.  The Assembly of Heads of State and Government met in January 1986 to sign the agreement that officially launched IGADD with headquarters in Djibouti. The State of Eritrea became the seventh member after attaining independence in 1993 and South Sudan joined in 2011.

In April 1995 in Addis Ababa, the Assembly of Heads of State and Government made a declaration to revitalize IGADD and expand cooperation among Member States. On 21st March 1996 in Nairobi, the Assembly signed “Letter of Instrument to amend the IGADD Charter” establishing the revitalized regional organization with a new name, “Intergovernmental Authority on Development”. IGAD with expanded areas of regional cooperation and a new organizational structure was launched during the Summit of the Heads of State and Government on 25th November 1996 in Djibouti.

To be the premier regional organization for achieving peace, prosperity and regional integration in the IGAD region

To assist and complement the efforts of the Member States through increased cooperation to achieve:

Working with the Member States and the development partners to:

1. THE ASSEMBLY OF HEADS OF STATE AND GOVERNMENT; The Summit is the supreme policy making organ of the Authority. The Summit determines the objectives, guidelines and programmes for IGAD and ordinarily meets once a year. A Chairman is elected from among the Member States on a rotational basis.

2. THE COUNCIL OF MINISTERS; The Executive Council is composed of the Ministers for Foreign Affairs and one other Focal Minister designated by each Member State. The Council formulates policy, approves the work programme and annual budget of the Secretariat.

3. THE COMMITTEE OF AMBASSADORS is comprised of Ambassadors or Plenipotentiaries accredited to the country of IGAD Headquarters, i.e. Djibouti. The Committee convenes as often as the need arises to advise and guide the Executive Secretary.

4. THE SECRETARIAT is headed by an Executive Secretary appointed by the Assembly of Heads of State and Government for a term of four years renewable once. The Secretariat assists Member States in formulating regional projects in the priority areas, facilitates the coordination and harmonization of development policies, mobilizes resources to implement the projects and programmes approved by the Council and reinforces national infrastructures necessary for implementing regional projects and policies.